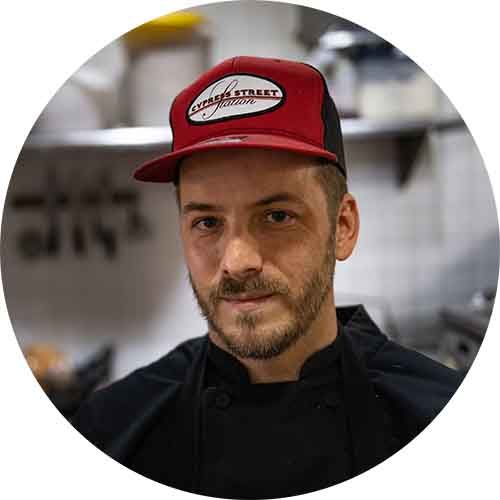 Located in the heart of Downtown Abilene, Texas, stands a historic landmark – an unparalleled upscale dining experience, set in a treasured icon that has pioneered the future of downtown dining for the best part of three decades. Recently revitalized and serving the city’s vibrant community, Cypress Street Station is a must-visit destination for anyone seeking an incomparable culinary experience with the spirit of community at its core. Our award-winning establishment is renowned for its Old West Texas hospitality and innovative New American cuisine, infusing well-known comfort food flavors with a contemporary twist. Our chefs use only the freshest, locally sourced ingredients in their artfully prepared dishes, allowing the essence of each product to shine through. A world-class wine list and Fresh Catch Daily selection complete the Cypress Street Station experience, ensuring both community members and visiting guests enjoy a truly memorable meal. 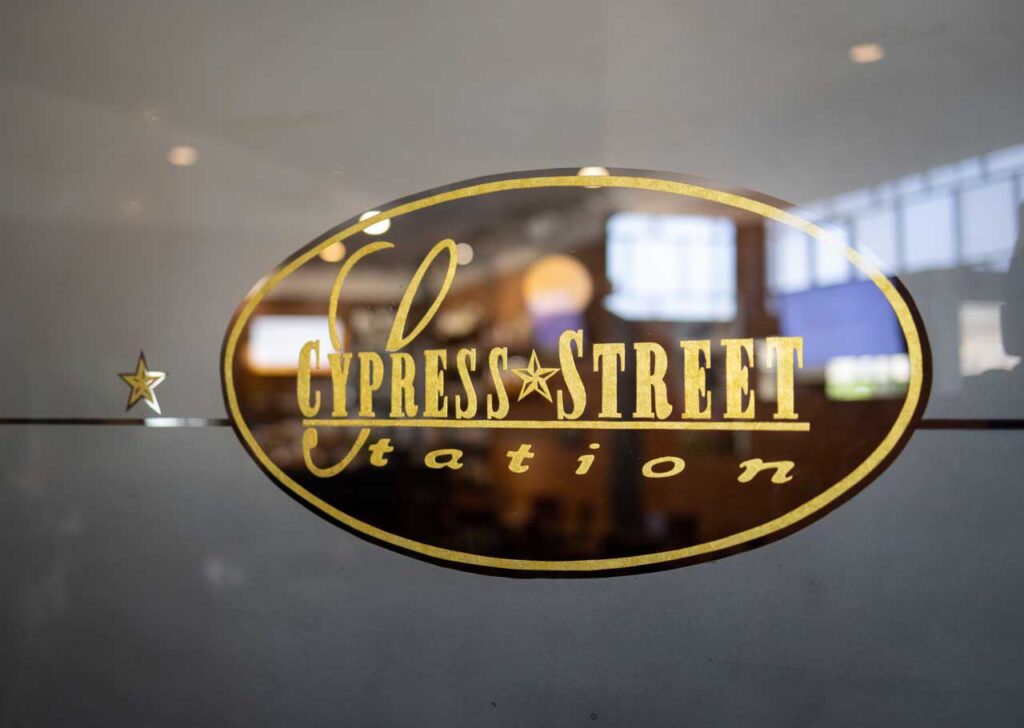 The late 80s saw most of Downtown Abilene boarded up and dilapidated before the district was restored in the early 90s. Affectionately dubbed “Downtown Abilene’s Landmark Restaurant”, Cypress Street Station was the only restaurant in the area at the time and stood as a beacon of hope during the city’s revitalization efforts. Today, many restaurants have followed in its footsteps, helping to create a thriving downtown community, but Cypress Street Station remains the only restaurant located in a historic building with a century-old story woven into its scaffolding.

Much more than a restaurant, Cypress Street Station has become part of the community’s identity, serving as a gathering place for business lunches, romantic dinners, family celebrations and special occasions over the past 30 years. When our restaurant’s original owner passed away, it was, therefore, no surprise that the community rallied behind his family until a proper suitor for the business was found.

Since taking over ownership, Terry and Amanda have enjoyed greeting old friends and meeting new ones while continuing to provide the Abilene community with the exceptional quality food and personalized service that has made Cypress Street Station synonymous with the very best upscale, downtown dining. As the backbone of the restaurant’s success, the community has continued to support Terry and Amanda’s mindfully-made improvements, and the new owners have been humbled by the outpouring of encouragement they’ve received.

As Cypress Street Station grows forward, the O’Connors are committed to remaining an integral part of Downtown Abilene’s dynamic resurgence, providing a gathering place for friends and newcomers alike to enjoy good food, great company and wonderful memories for many years to come.

Terry and Amanda O’Connor took over operations of Cypress Street Station on January 1, 2017. The couple have both spent their careers in the restaurant industry and hold over 40 years of experience between them.

A true West Texas rancher’s daughter at heart, Amanda grew up in the Big Country on a Cattle Ranch in Coleman County. She went on to study Hotel and Restaurant Management at Texas Tech University before embarking on a successful career in the industry. Equally as invested in building a career in hospitality, Terry studied Culinary Arts at Auguste Escoffier in Austin. A Chicago-native, Terry moved to Virginia with his family before he and Amanda were married.

After 12 years of marriage, many memorable beach and mountain vacations, and adding 2 furry friends to the family, the culinary-obsessed couple took on the commitment of continuing Cypress Street Station’s legacy by breathing new life into the establishment while remaining true to its heritage.

Their emphasis on treating staff as part of the family, has only worked to attract and maintain the most qualified personnel, seeing Cypress Street Station recognized as 2022 Abilene Chamber Business of the Year. 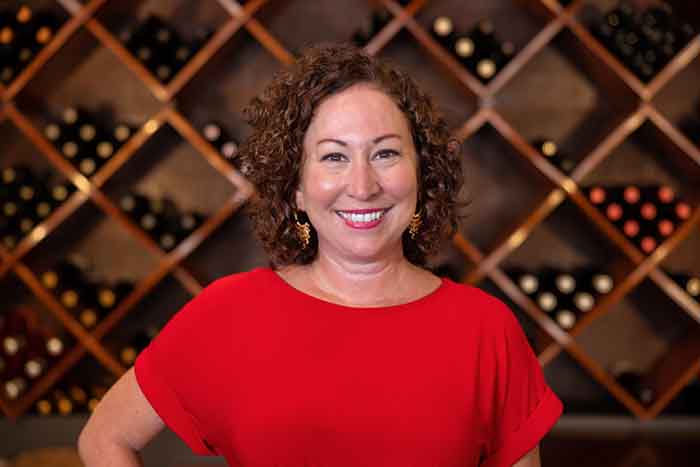 Amanda grew up in the Big Country on a Cattle Ranch in Coleman County. Studied Hospitality – Hotel/Restaurant Management at Texas Tech University. 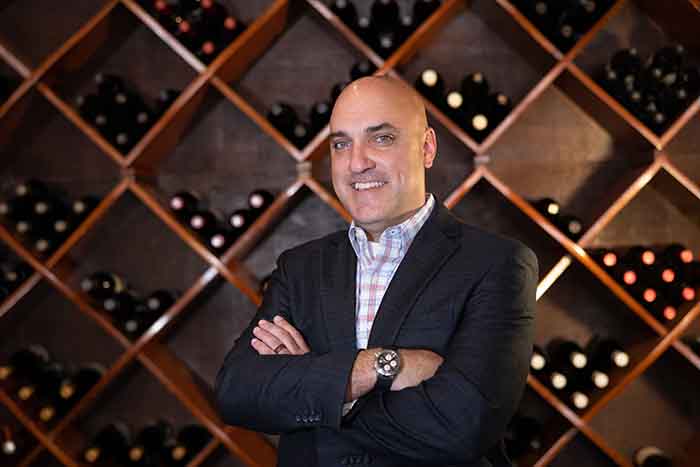 Terry grew up in Chicago before moving to Virginia with his family. Studied Culinary Arts at Auguste Escoffier in Austin.
Terry and Amanda took over operations of Cypress Street Station January 1, 2017.

Amanda is a true West Texas ranchers daughter and loves Beef so the Petite Filet is her favorite thing on the menu, with the Bayou Florentine coming in a close second.

Terry loves the fresh fish and all of Chef Gee’s soups.

Amanda and Terry will be married for 12 years in November.

They have 2 dogs. They love beach and mountain vacations. 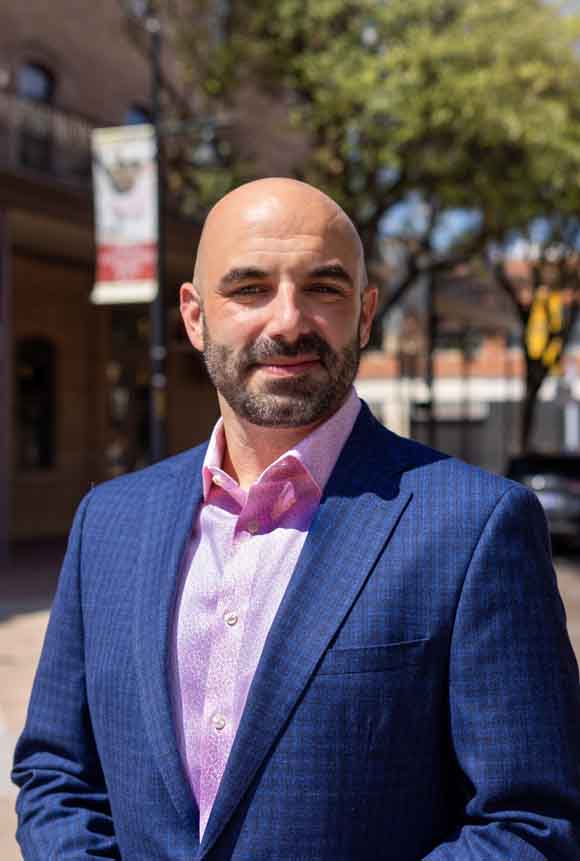 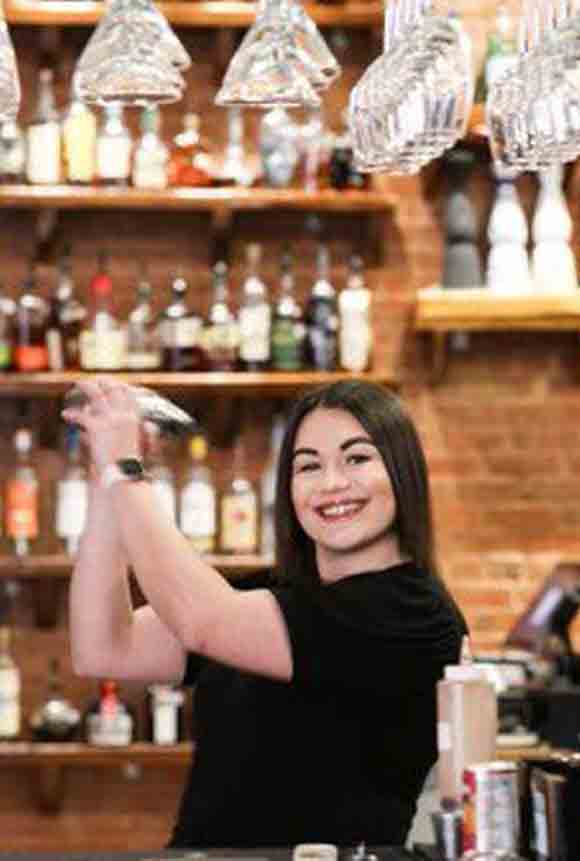 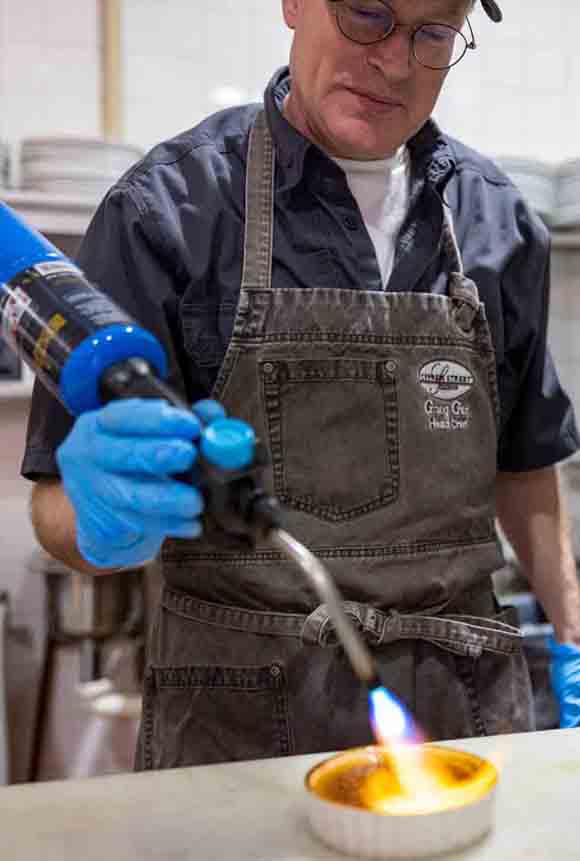 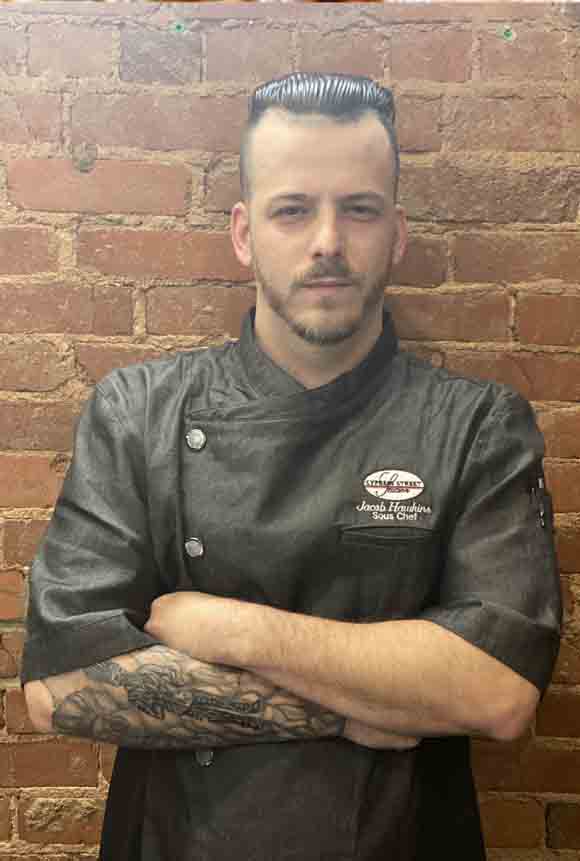 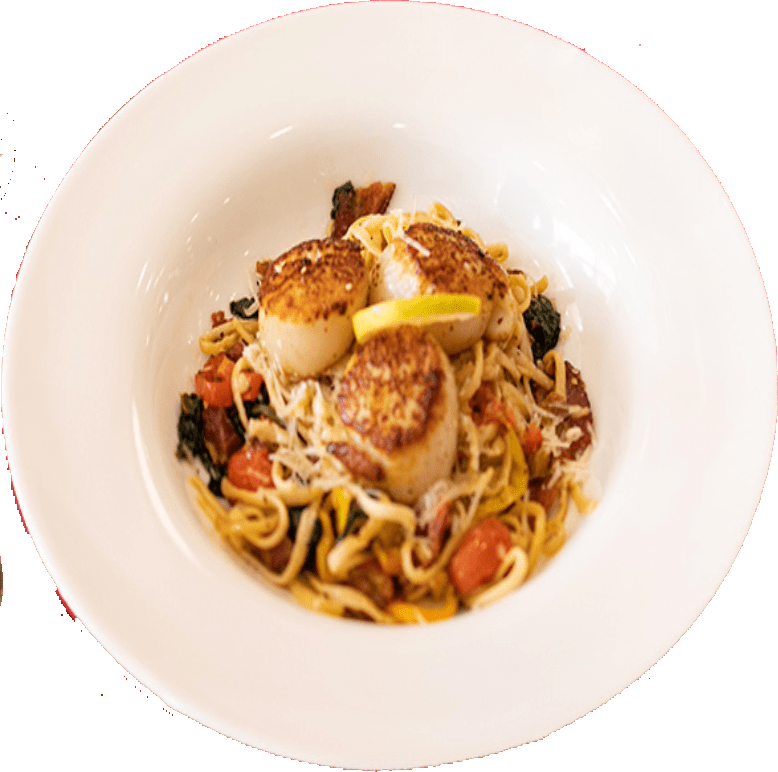 We do our best to treat our employees as part of our family. We care greatly for their well-being and their happiness. Without the wonderful people who work with us, we would not be where where are today.
Check our Menu 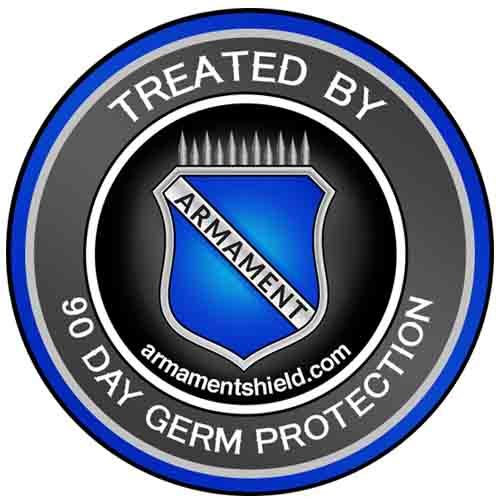 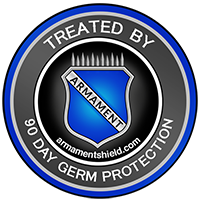 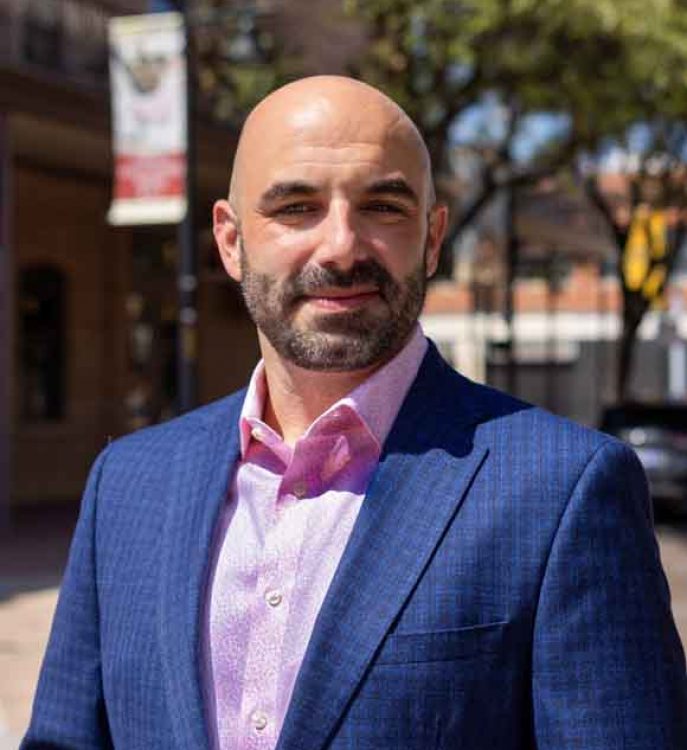 Matthew
General Manager
Matthew is a native to Abilene, growing up and graduating from high school here before moving on to Texas Tech University. While he worked at many restaurants along the way, his true passion for the Restaurant & Hospitality industry kicked in when he began working in fine-dining at restaurants such as Vic & Anthony’s, Del Frisco’s, and Pappas Bros Steak House.

After finishing law school and passing the bar exam, Matthew spent years working in the legal field. The attention to detail was something he enjoyed, but yet he craved more personal interaction and returned to the restaurant industry becoming the first full-time manager for Cypress Street Station in 2019.

Matthew is now the General Manager and enjoys using all of his previous experience alongside the owners, Terry & Amanda O’Connor, to help create unique and wonderful memories for the guests. It has become the home he loves to call, “Upscale but not stuffy.”

If you don’t see him on the dining room floor, there is a good chance he is with his two beautiful children or possibly swinging a golf club on a course somewhere. 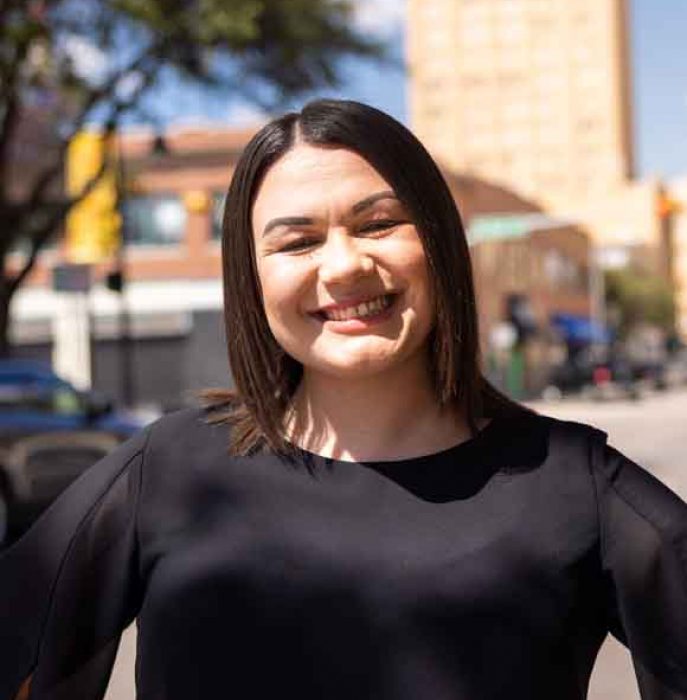 krystalle
Head Bartender/Manager
With over 10 years of hospitality and food service experience Krystalle joined the Cypress Street Station family in 2018. This Odessa native was immersed in her family’s food service life from an early age. Her father was a successful fast food restaurant owner growing up, who always kept Krystalle engaged through her childhood.

At home, Mom always personified hospitality through knowing the importance of making others feel welcomed. Combining these two elements has given Krystalle the desire and components it takes to create an inviting and warm atmosphere where anybody is welcome to relax and enjoy themselves with an amazing meal in front of them. Not to mention the passion that exists within crafting cocktails might be Krystalle’s favorite creative outlet. Striving for excellence, hospitality-focused, and highly knowledgeable in fine wine, top-shelf liquor, specialty cocktails/mixology and the food menu.

Krystalle enjoys being active all day and getting to meet the most wonderful people in Abilene. She is working her way through the hospitality industry by wearing many different hats at Cypress Street, from serving, bartending, catering lead and managing. Krystalle plans to keep building her career in the restaurant world and by the O’Conner’s side. Come see Krystalle and try her favorite cocktail The Sidecar paired with her favorite pasta The Farmhouse!

Head Chef
Chef Greg L. Gee has been the Chef at Cypress Street Station for fifteen, maybe sixteen, years (either way, a bunch of years). He grew up in Victoria, Texas, then attended Abilene Christian University, where he received a B.A. in English and an M.A. in Literature. He graduated with honors from Texas Culinary Academy, which no longer exists. He developed most of the dishes on the C.S.S. menus, and he’s proud of them, so please stop asking him which one is his favorite. His professional style is as influenced by Gulf Coast fish houses and barbecue joints and taco trucks as it is by his unfortunately expensive classical culinary education, which plays a big part in Cypress Street Station having its own distinctive flavor. 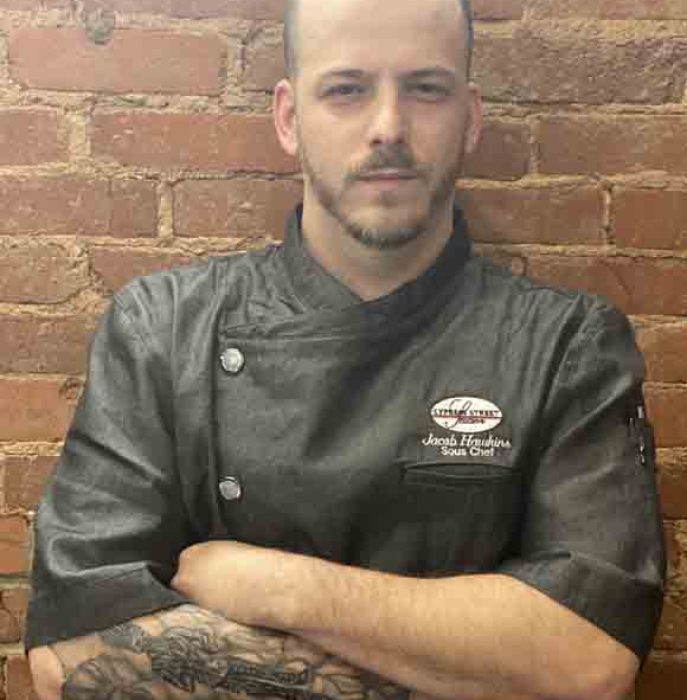 Jacob Hawkins born and raised in Houston Texas and began his culinary career at the age of 16. Jacob joined the Cypress team in 2019 as a salad cook.

Shortly after he found himself wanting to be more creative and both Amanda and Terry encouraged him to learn more. He quickly advanced and worked his way up the chain creating daily feature dishes and fresh catch dishes.

He certainly caught the eye of the owners and the regulars resulting in a promotion to Sous Chef just one year later. When Jacob is not in the kitchen, you can find him coin collecting, playing pool, or on some fun outdoor adventure.